Portrait of the Artist as a Young Man 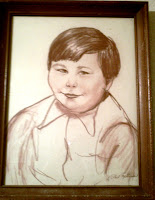 John Clare, age 5.
From the collection of Warren and Mary Ann Clare, sketched in Anchorage, AK 1975.
Posted by John at 10:35 AM No comments: 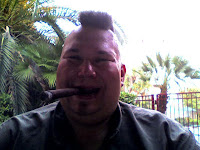 Hey there! I'm enjoying a smoke out by the pool area, and thought I'd blog a bit.
Things have been wonderful and busy, as you can see online at the KPAC Blog. Be sure to watch the interview there with Alondra de la Parra - she was a real treat to hear with the San Antonio Symphony. They really should hire her right now, and make a big splash in the media about it. The audience was thrilled and the orchestra sounded fabulous. Her ideas about audience building, programming, marketing and music making showed in the pre-concert talk, the concert itself, and at a talk-back afterwards. While I've NEVER really gotten anything from a talk back, having one with Music Director candidates is a no brainer and fab idea. Of course, they should just hire Alondra and not worry about talkbacks...but I digress.
I just finished making a birthday cake for someone very special in my life. Pardon me if I don't kiss and tell, but I'll tell you I've never been happier. It happened rather unexpectedly and my life over the last three weeks is even more amazing than I thought possible. You'll know more later.
I completed my first pledge drive at work, and it went well. This financial world we live in doesn't make it easy on public broadcasting, but San Antonio stepped up to the plate - thank you so much!
I also am playing alot these days, prepping for a violin recital in Madison next month. As I mentioned I've met a special someone, I am writing a solo violin rhapsody in her honor. Its' coming along, and I'll pen some more tonight. Scales and practice fill hours between caring for my parents.
Speaking of which, we had a great time yesterday with a Catholic disability group, and I wound up playing violin for a service afterwards, and met a nice guitarist Chris. He wants me to play on his next album, which was flattering, but I barely know the guy. Besides, I have two close friends wanting some tracks for a Dylan cover album, and one who is putting togther his own contemporary Cuban music cd, which I've already said yes to both!
Modern music continues to have some great projects, with a trip to NYC after my Madison recital, doing some filming...more on that soon too!
My latest culinary success includes bacon sloppy joes, broccolli cheese potato soup, spice cake and corn fritters. That latter item is an old family favorite, basically its corn pancakes.
My folks continue to have good days and bad, with it seeming to have more bad than good - but I have faith that things will be ok.
I'm also very excited that my friend Maggie is coming to visit San Antonio the end of this week. I suspect I'll get to know downtown even better! No doubt we'll have pictures and posts with her here or on facebook - or both!
I'm sure I'm missing something, but that's all I can think of off the top of my head.
Posted by John at 6:56 PM 1 comment:

I don't watch very much TV at all, there just aren't enough hours in a day...but there is one show I love - How I Met Your Mother. It's funny, smart and has great chemistry. This last Monday I had to miss it to hear a recital with Carter Brey and Chris O'Riley. (Is it funny that one of the creators of HIMYM is named Carter Bays?)
So I watched it online since I had forgotten with the pledge drive going on to tape the episode. It was the best episode so far this season! And it included Zitch Dog! I had posted about this hilarious game after the season two episode aired, and found I have the highest ranking in Google for a search as TONS of people are googling it! (I also get lots of hits from Grizzly paw Ice Cream sandwiches!)
Anyway, Zitch dog was in an episode about Marshall's car but I'm glad it made a reprise in this week's episode.
Posted by John at 8:21 AM No comments:

Important information about the Presidential election:
http://www.artsactionfund.org/pdf/press/McCain_Obama_record_final.pdf
Posted by John at 10:17 AM No comments:

How it looks for Madison so far:
Violin Recital

Hey, they're taking my "Five Things!" Of course, I only picked Five Things (almost always positive!) to give myself a framework to write about concerts...and I never claimed it was an original concept for concert criticism or blogging...
Posted by John at 8:03 AM No comments:

One of my favorite artists, Helene Grimaud is coming out with a new album of Bach. Here is the video: 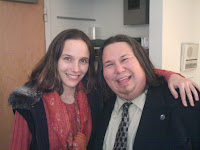 You might remember our interview this last year here.
Posted by John at 12:26 PM No comments:

Hey, smile there! You could be having a day like the coach of the Chicago Blackhawks!
The king is dead, long live the king.

In the meantime, have a look over at the KPAC blog where there is alot going on...videos, interviews, reviews...have fun!
Posted by John at 11:35 AM No comments:

You may or may not know I write for several online outlets, mostly concerning classical music - KPAC's blog and for Sequenza21...so I don't always get things current here.
Be sure to check them out when you get a chance.
I ran across this blog, and was fascinated, and am looking forward to more posts.

I'm also getting closer to 1000 posts, and nearer to 50000 visitors, we'll have some fun with both!
Right I'm getting lots of clarinetists visiting after a post on a player bb about musical terms. Thanks for stopping by, we'll have more humor ahead!
Posted by John at 4:55 PM No comments:

Chris O'Riley at TPR from John Clare on Vimeo.

The next video is better technically with another Chris - Christopher Seaman conductor! There won't be a microphone in front of his face on the video...what can I say, I'm a radio guy...
Posted by John at 1:41 PM No comments:

I went out to a rehearsal of the Children's Chorus of San Antonio this last weekend and taped part of their rehearsal for Texas Public Radio.

It was a blast, keep an ear out for it on Classical Spotlight and Performance Today!
Posted by John at 2:17 PM No comments:

I went to the SA Symphony again last night, since I had to leave slightly early on Friday, and it was again lovely. This time I heard all of the Brahms - actually the whole prgram last night...and I liked it, which is hard to enjoy the same rep back to back when it is familiar, you've played it, spun it on the radio, you know...and I liked my seat downstairs, there was a bit more orchestra sound.
Orli Shaham was delgithful, both in her simple and elegant Mozart, and in person talking. Christopher Seaman killed me with the line, "Between the two of us, we make a full head of hair." (I need to work on my British accent and I'll tell it live sometime.)
Anyway, the orchestra shone in the Britten and really made some honest music in the Brahms. Mozart, especially the Piano Concerto #21, might have been the best, except for a few flubs with a 2nd violinist who played a solo in the 1st movement with a premature chord, and some little things in the 3rd movement - but such a standard rep piece to engage me both nights is something else!
Bravo.
Posted by John at 8:16 AM No comments:

OMG, I totally laughed with this latest visit to ClassicallyHip:
http://www.google.it/search?hl=it&q=Big%20Organ%20pipe&btnG=Cerca%20con%20Google&meta=
Thank you Italy!

SA Symphony was wonderful last night, and I really enjoyed seeing the Majestic Theater for the first time too.
Orli Shaham was splendid in Mozart, and Christopher Seaman led the music with good taste. Ultimate cue with his left pinky for the xylophone in Britten's Young Person's Guide to the Orchestra cracked me up.
I had to split afte rthe first movement of Brahms' 2nd but will catch it tonight.
Posted by John at 8:11 AM No comments:

Last weekend, amidst recitals I took my folks to a luncheon...here they are at the China Buffet 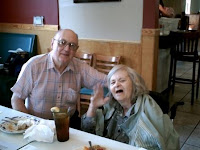 myself with mom and Sister Jo-Michelle 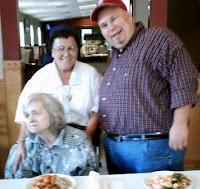 and my mom afterwards petting a dog specially trained to visit with the elderly. 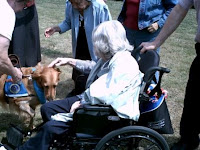 This weekend is another filled with concerts, and next weekend I'll get them to AccessAbility.
Posted by John at 8:53 AM No comments:

Exciting news from eighth blackbird about a new concerto by Jennifer Higdon!
(and totally check out the video posting with Sarah Palin playing flute! on their blog as well!)
Posted by John at 6:09 AM No comments: