What a joy to hear not only the great news that Daniel Catán's Florencia en el Amazonas is scheduled for the 2014-15 season of the LA Opera, but also to find the work brought to life in this performance at Boston University! This remains one of my favorite of Daniel's operas. It always sends a shiver down my spine, prompted not only by the gorgeous vocal writing, but also by the stunning orchestration. When I interviewed him in 2006, he was demoralized by the fact Florencia had seen performances in only three American opera houses, and was only then (2006) getting its first European staging. ¡Qué lástima Daniel is not here to enjoy his continued success! He passed away suddenly in 2011, at the age of 62.

March 11 brings the U.S. release of The Beethoven Journey: Piano Concertos Nos. 2 & 4, the second recording from 2013 Gramophone Hall of Fame inductee Leif Ove Andsnes in his long-term focus on the master composer’s five piano concertos. Like the first title in the series, which won both iTunes’ Best Instrumental Album of 2012 and Belgium’s Prix Caecilia, the new album was recorded for Sony Classical with the Mahler Chamber Orchestra (MCO) and directed from the keyboard by the Norwegian pianist himself. The new release heralds Andsnes’s return to the States this March, with an all-Beethoven solo recital program that takes him to the main stages of four of the nation’s leading venues – New York’s Carnegie Hall (March 19), Chicago’s Symphony Center (March 16), Atlanta’s Spivey Hall (March 14), and Princeton’s McCarter Theater (March 17) – crowning his epic 19-city, eleven-country tour across America, Europe, and Japan.
It is Andsnes’s close rapport with the Mahler Chamber Orchestra – his fellow travelers since the project’s inception – that anchors “The Beethoven Journey.” Selecting The Beethoven Journey: Piano Concertos Nos. 1 & 3 as its recording of the month, Gramophone magazine wrote, “There’s so much more to this partnership than just exceptional playing; there’s a palpable sense of discovery, of living the music; [Andsnes] and the MCO players are already finishing one another’s musical sentences like an old married couple, but with an ebullience and mutual fascination that is anything but world weary.”
BBC Music magazine hailed the album as “an all-round winner of a disc, with superlative playing from both soloist and orchestra, and a recorded sound to match.”
For their new recording, Andsnes and the MCO turn to Beethoven’s Second and Fourth Piano Concertos, both of which the pianist has played extensively in concert, and which he calls “music that feeds me constantly with joy, surprise and discovery. There is of course much drama and intensity in this music, qualities we often associate with Beethoven, but there is also so much childlike beauty and innocence in these concertos, and a constant sense of wonder.” After he performed the Second and Fourth Piano Concertos with the Los Angeles Philharmonic and Gustavo Dudamel last fall, the Los Angeles Times concluded that “the two Beethoven concertos were in masterful hands,” thanks to the pianist’s “searching maturity coupled with good rhythm and sharp articulation.”
The pianist’s previous Carnegie Hall Beethoven recital prompted the New York Times to observe:
“Mr. Andsnes played with uncanny steadiness and magisterial sweep. … His playing was impressively pristine, lucid and supple. But the mystery and audacious imagination in the music came through all the more. The slow movement had eerie serenity. In the finale, the beguiling theme pierced through the hazy harmonies of Mr. Andsnes’s fluid, graceful arpeggios. How often do you think of the ‘Waldstein’ as wondrously beautiful? That is what Mr. Andsnes achieved.”
For his return to the States this spring, Andsnes’s all-Beethoven solo recital program comprises the Sonatas in F minor “Appassionata” (Op. 57), B-flat (Op. 22), and A (Op. 101), as well as the Variations in F (Op. 34). The four high-profile American concerts represent one of the high points of a monumental tour that takes the pianist to some of the world’s foremost concert stages, including London’s Barbican Hall, the Leipzig Gewandhaus, Berlin’s Philharmonie, Vienna’s Musikverein, Rome’s Accademia Nazionale di Santa Cecilia, and Tokyo’s Opera City. Andsnes’s solo Beethoven performance at the most recent Salzburg Festival inspired the Salzburger Nachrichten to conclude: “Leif Ove Andsnes is one of the most exemplary and serious musicians – not just of his generation.”
For the final leg of “The Beethoven Journey,” Andsnes turns his focus to Beethoven’s Fifth “Emperor” Concerto and Choral Fantasy for piano, chorus, and orchestra, which he and the MCO look forward to touring and recording together in Italy, Norway, and the Czech capital (May 16-23). The pianist also performed both works with the Helsinki Philharmonic (Jan 22 & 23) and the Norwegian Chamber Orchestra (Jan 28–Feb 2), while the “Emperor” concerto will serve as the vehicle for his upcoming appearances with the London Philharmonic (April 26) and the Swedish Chamber Orchestra (May 8 & 9). When “The Beethoven Journey” last took Andsnes to London’s Royal Festival Hall, for season-opening concerts in 2012, the Telegraph pronounced him “a wonderful soloist.”
A complete list of Andsnes’s upcoming engagements follows, and more information may be found at his web site: www.andsnes.com

Be sure to check out my latest interview with a composer - the awesome Vivian Fung over at S21!

I first came to know the work of composer/band leader Maria Schneider through her remarkable big band, made all the more remarkable by her at times "symphonic" scoring. No, don't think Ellington, or expect the Maria Schneider Big Band to sound like the Sauter-Finegan Orchestra. It's more akin to the various bands written for by Miles Davis' favorite arranger, Gil Evans. And there's a good explanation for this. Maria Schneider admires the work of Gil Evans. In fact, I'm told she took a job at a New York City copy shop which she knew was frequented by Gil Evans so she might have the opportunity to see up close his scores, to try to analyze how he did what he did. What Gil Evans did was write for a big band more as an orchestra than a traditional ensemble of trumpets, trombones, saxes and rhythm section. For the famous sessions with Miles Davis ("Porgy and Bess" and "Sketches of Spain" especially), Evans called in a quartet of French horns and additional percussion and woodwinds. But more importantly, Evans created exquisite orchestrations and breathtaking instrumental voicings, taking a cue from the orchestral palette of the Impressionist School of Classical Music.

Maria Schneider got her chance to study even more intently the work of Gil Evans when he invited her to work as his assistant. Although this close apprenticeship would only last a year, or so, Maria learned her lessons well, finding that the key to Gil Evans genius was his enthusiasm for trying something new. She brings this same inventive spirit into the scoring and composing she does for her own band, and this is some of what has set her apart, winning for her two Grammys as a jazz composer and big band leader.

Maria Schneider's early musical education was a mixture of serendipity and tradition. Her first piano teacher, an accomplished stride pianist who had retired from Chicago to tiny Windom, Minnesota, Maria's hometown, infected Maria with a love of music. Maria says that it was then, as a young child, she made up her mind to become a musician. There was no turning back. She attended the University of Minnesota, studying the traditional classical music curriculum but always with an eagerness to experiment outside the more or less strict boundaries of "legit" music. Her composition teacher, one who according to Maria taught in the Hindemith tradition, encouraged her to hang out around the university's jazz band. The rest, one might say, is now history. 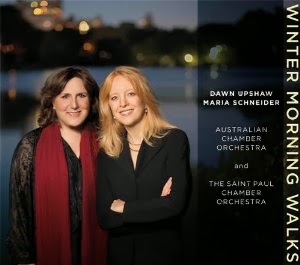 But wait! Through all her success as a jazz composer and experimenter, she had never written for an orchestra, that is to say an ensemble of strings, woodwinds, brass and percussion. So when she got the opportunity to collaborate with soprano Dawn Upshaw, she took it. It was not without its risks. Maria admits that even when she is in the comfortable environment of writing for her big band, she has moments of insecurity and doubts. These elements were certainly there as she and Upshaw undertook first a song cycle called “Carlos Drummond de Andrade Stories." This was composed to a commission by the St. Paul Chamber Orchestra. To the delight of Schneider and Upshaw, the collaboration worked. Perhaps even more delighted was Schneider's father, who immediately encouraged another collaboration. This came to life three years later with a commission from the Australian Chamber Orchestra. The resulting cycle, "Winter Morning Walks," was the composition which recently won for Maria Schneider a Grammy for Best Contemporary Classical Composition. The album, published as "Winter Morning Walks" and also containing the "Drummond Stories," won two other Grammys, one for Best Solo Vocal Performance and the other for Best Engineered, Classical.

I had the distinct pleasure of interviewing Maria twice in May of 2013, just as "Winter Morning Walks" had released. The second interview, in Austin where she was conducting a program of her jazz compositions with the University of Texas Jazz Orchestra, had the benefit of video. This enables one to not only hear Maria's responses to my questions, but also to witness her animated enthusiasm for music, her music, and her defense of The Artist (and the innovative and independent ArtistShare initiative). The half hour interview splits nicely into three segments, and that is how they are presented here.

Part I: Classical, Jazz, or Does It Matter?

Part II: In Praise of Hindemith (Here Maria reveals her admiration for the music of Hindemith, then names her other two "desert island" composers.)

Part III: In Defense of the Artist

Great few days in Austin and Amherst!
Posted by John at 3:32 PM No comments: