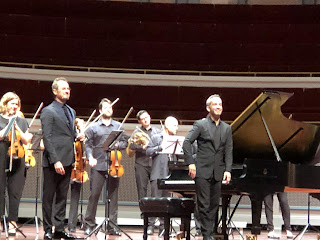 What a finish for the Australian Chamber Orchestra Sunday night in Carmel at the Palladium.
The concert was delayed for weather and delayed flights. Those on time though were treated with music from Inon Barnatan! Three selections from his upcoming Carnegie Hall recital were played: Mendelssohn Rondo Capriccio, Schubert’s g flat Impromptu, and the finale of Prokofiev’s 7th Sonata were played as the audience waited for the ‘main’ concerrt. What a treat!
The concert did start at 8, an hour after advertised with Bach. Sublime, silly, and brilliant make up with arrangement of Art of the Fugue.
Barnatan returned for Mozart’s Piano Concerto 12, with lots of gusto and drama. It was fresh and friendly.
Sadly the intoxicated woman in the row ahead of us was quite vocal, from the very start, saying “beautiful “ loudly, shouting “We love you!” during Richard Tognetti’s opening remarks, and during the finale of the Mozart Concerto, falling in a row while trying to exit. On top of that, a patron’s phablet went off during the slow movement of Mozart. Throughout the first half, another couple constantly spoke in whispers about “stairs”!
Sadly as our babysitter expired at 10pm we had to leave at intermission, missing what is one of THE masterpieces of western music, Beethoven’ Opus 130 with the Grosse Fuge. Oh well, with the drive and my schedule all’s well that ends well. Here’s to safe travels for the ACO and to better behaved audiences at The Palladium!
Posted by John at 7:57 AM No comments: