Have some fun with Mezzo-soprano Cecilia Bartoli and her latest cd...answer this question:
What was Farinelli's birth name? Send your answer here to get a piece of the puzzle...or click on the clue pictured below.

For the previous clue, go here.
For the next clue, head here.
Posted by John at 9:53 AM 1 comment:

Cecilia Bartoli’s latest recording project, Sacrificium, is one of this fall's most anticipated releases. To celebrate, Decca will host a free, unique event on November 16 at 7:30pm. The release party, at (le) poisson rouge in New York City's West Village, will feature a video recording of Bartoli performing selections from the album. The concert was recorded on September 10, 2009 at the court theater of the Reggia di Caserta, a palace built for the Bourbon kings of Naples. Mixologist Allen Katz has created a special cocktail, "The Castratini," for the occasion. Bartoli will greet New York City fans with a special video message, and door prizes will be awarded.

Cecilia Bartoli found artistic inspiration for Sacrificium in one of music history’s most fascinating—and cruel—subjects: the castrati of the Baroque era. Constantly challenging herself and her fans by recording virtually unknown repertoire, Bartoli continues to carry the art form to new aesthetic and intellectual heights. This new album is no exception, featuring over an hour of world-premiere recordings. Sacrificium marks the first collaboration of Il Giardino Armonico, Giovanni Antonini, and Bartoli since their Grammy Award-winning The Vivaldi Album ten years ago. The comprehensive album package includes over 100 minutes of diverse and splendid tracks, as well as a 100-page illustrated compendium The A to Z of the Castrati. The album, which was recently featured in the New York Times, Billboard, and on NPR, releases today: October 26, 2009.

Allen Katz is the Director of Mixology & Spirits Education for Southern Wine & Spirits of New York. He is also the host of The Cocktail Hour a weekly program on Martha Stewart’s Sirius Satellite Radio. He has been a featured sommelier at wine festivals around the country and is a lecturer on spirits and mixology for the Wine & Spirits Education Trust (WSET) in New York City as well as for the Food Studies Program at New York University.

Cecilia Bartoli’s voice and artistry have sold 6 million CDs, capturing the hearts of countless opera lovers and casual listeners alike. She is known to sell out prestigious concert halls all over the world, most recently New York’s Carnegie Hall last spring. Her awards include multiple Golden Discs, four Grammys, seven Echos, and the Victoire de la Musique. She has been given Italian knighthood, solidifying her role as one of Rome’s favorite daughters. She will tour the repertoire of Sacrificium throughout Europe in the 2009-2010 season.

(le) poisson rouge is located at 158 Bleecker Street, between Thompson and Sullivan.
Posted by John at 3:32 PM No comments:

I like to keep track of who is visiting here, and when checking today of how folks find ClassicallyHip, I laughed out loud when someone in Redditch, UK searched for "John Clare Badger Music." really.
Badgers?! we don't need no stinking badgers music!
Also alot of searches for last weekend's SA Symphony concert with Alondra de la Parra, the buzz and excitement around doesn't surprise me that folks are searching.
Other top searches include Helene Grimaud, Janine Jansen, and these days as it gets performed more & more, Concerto 4 3 by Jennifer Higdon...which is the most searched of all time on this blog, due to a link from a politcal site who grabbed my review.
Enjoy, much more coming this month, including a pumpkin decorating contest I am entering!
Posted by John at 4:09 PM No comments:

I heard the San Antonio Symphony Friday night at the Majestic Theatre in downtown San Antonio.
1. The program began with the Star Spangled Banner - odd for the second classics concert - which is really not a big thing, but should they play it for all the concerts? Someone mentioned this was the start of a different series than the last concert; but come on SA Symphony management, seriously? Make it standard on ALL concerts or just the FIRST of the season; or better yet, do different versions every time, which would be nice for the audience AND the players/singers.
2. Clarice Assad's Brazilian Fanfare is downright fun. Not a serious piece at all, it changes moods and themes quickly. While it is not a seasoned work, it shows brilliant orchestration and rhythm. These were brought out with the orchestra by the talented Maestro Alondra de la Parra - who should be the next Music Director of the SA Symphony.
3. Debussy's Prelude to The Afternoon of a Faun was sumptuous. de la Parra brought out stunning dynamics and soaring melody lines from the orchestra. Principal flute Tal Perkes was delightful, as well as Principal Horn Jeff Garza in solos.
4. Rounding out the first half was Prokofiev's Second Violin Concerto. The soloist was Jennifer Koh, who I have seen several times in concert (read previous Five Things) and interviewed on the radio before. Somehow, this was not the star I have heard, no doubt due to a cold. Often it was scratchy, as if she was impersonating Zukerman(!), instead of her usual gorgeous sound. In the audience, cellphones and snores detracted from the performance. An encore of Bach (Partita #2, allemande) was better, but after hearing Shaham's Bach recently in the same space, it was not as inspiring. Again, I believe it was poor health that contributed to this performance - even quarterbacks like Kurt Warner have bad days, you just hope they aren't the day of the Superbowl...
5. The program ended with Beethoven's glorious Seventh Symphony. String Basses were moved to the back of the stage and brass brought to the side, experimenting with the sound at the Majestic - with great improvement! The energy of Alondra was infectious, for the ensemble (who castly improved from the morning rehearsal) and for the audience who leapt to their feet and gave a huge ovation for de la Parra. It was well deserved. This "war horse" had shape and motion, an arc that moved logically, artistically and brilliantly through Beethoven's music. This is a concert to catch and share with your friends - it repeats tonight at 8pm.

The San Antonio Symphony should move now to hire Alondra de la Parra. Not just for marketing reasons: she is a young, beautiful, latina conductor who has spark and moxie. Nor should they hire her just for the raw talent which shows and gleams in her attitude, baton and spirit.
They should hire her because it is the right thing to do. True EXCITEMENT in the classical world is rare unfortunately. de la Parra exudes charisma and intelligence. She has ideas on audience building, music, outreach, and education. In an uncertain world, hiring Alondra would go to having leadership, a musical guide and energy building force for the San Antonio Symphony. The path is clear in this, stop the search and announce that Alondra de la Parra is the seventh Music Director of the San Antonio Symphony.

Here is an interview with Alondra on stage @ the Majestic:

I was delighted to see that Performance Today is featuring my friend Paul Moravec, and a piece of his honoring his parents. Too cool, check it out, it will be on the site for at least a week, I think features are archived, but do yourself a favor and take a look & listen now, I'll be seeing you in all the old, familiar places I'm sure ;)
http://performancetoday.publicradio.org/
Posted by John at 4:53 PM 1 comment:

Wonderful week in three states, four concerts, two documentaries and lots of friends, food and fun. Back to my day job, and an airshift this afternoon AND an interview with Alondra de la Parra. Tonight a concert with SA Symphony and I need to get my hands on my fiddle, next week is Mid Texas Symphony and our fundraiser.

Here is a sample from last weekend of SOLI performing John Williams: 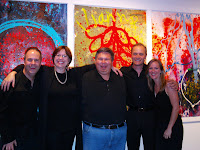 I am wrapping up being on the road with SOLI, it's been a real blast. Today fly out of Denver to Dallas, then on to Baltimore to work with the Peabody Wind Ensemble and a world premiere of Judith Lang Zaimont.
Here I am with SOLI at the CS Fine Arts Center after their concert in the permanent collection.
Posted by John at 9:10 AM No comments: